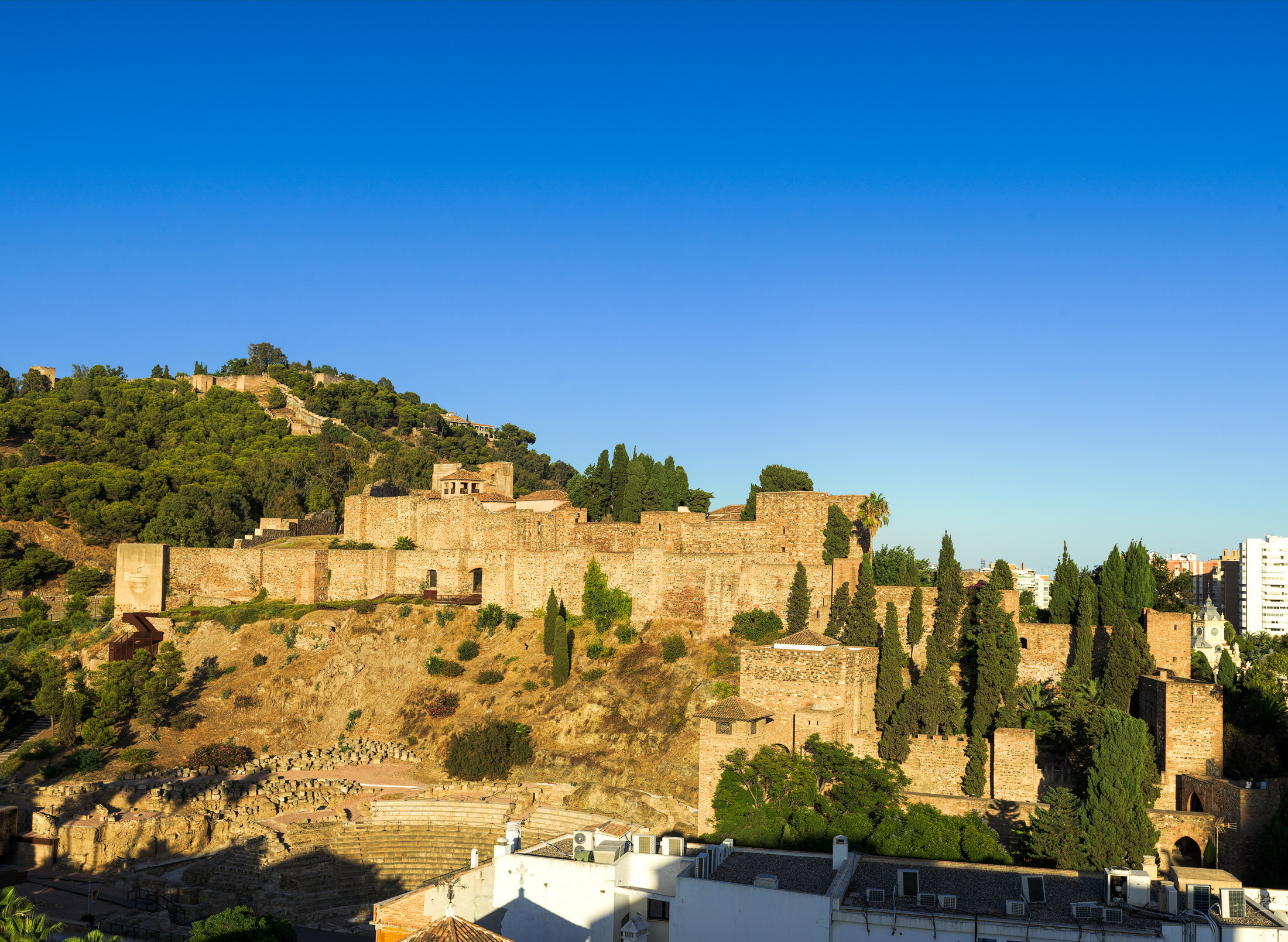 View of the Alcazaba from the Plaza de la Merced

[1] The Alcazaba (which comes from al-Qasba, meaning urban fortress) is located on the hillside of Mount Gibralfaro, in the small bay that is home to the city of Malaga. Its strategic position led it to be inhabited by ancient civilisations such as the Phoenicians, who settled on the hilltop around 600 B.C., and the Romans, who also settled in the area: on the southern slope, where remains have been found of a Roman villa and of industrial facilities for salting fish, and on the western slope of Mount Gibralfaro, where they built a theatre in the 1st century. During the Islamic period, the Alcazaba was initially built as a fortification, and later became a palace-fortress, and the seat of the city government.

The first records of the Alcazaba are from the period of the Umayyad Emirate, which was closely associated with the city of Malaqa, during the time of Abd al-Rahman I in 755, when sources mention the Alcazaba as a fortress. The construction of a mosque for its interior, as an aljama or Friday mosque, was ordered in the 8th century. It may have been located in the current Plaza de Armas, fulfilling the function of an aljama until the new great mosque was built in the city, in the 9th century. Remains of houses have been found in the entrance area to the Alcazaba that date back to this first period, called the Emirate period. This space was not occupied later, as it was the entrance to the fortress until the 18th century. Thus, faint remains were preserved under the house that was demolished in the 1940s.

The 100 years of the Caliphate was a period of prosperity. Malaqa regained the importance it had had in antiquity as a coastal city and port. Today, the construction of some areas of the Alcazaba have been dated to the Caliphate period, with the stretcher and header bond in ashlar masonry that is characteristic of this era. However, this construction was totally covered by works from the Taifa and later the Nasrid periods.

The year 1014 during the Taifa period is considered to be the beginning of local rulers’ independence from the central power. The Hammudid Caliphate settled in Malaga, although there is very little information available about this in the written records. It was a time of great instability, marked by the pressure of the Christian advance. It was at this time that the first major works were carried out, and the origin of the wall is attributed to this period. It was the Hammudid Dynasty that began the construction of the palatial area in the Alcazaba as the seat of power, becoming the palace residence of the governors of the city until its conquest by the Christians. No longer a mere defensive fortress, it was progressively beautified and adorned with symbols associated with power. The triple arches with an alfiz (moulding that encloses the outward side of an arch) in the Taifa Palace, which are an imitation of the fashion in Cordoba, date back to this period, and it is probable that the first Torre del Homenaje (Keep) currently inside the Nasrid work is also from this time. 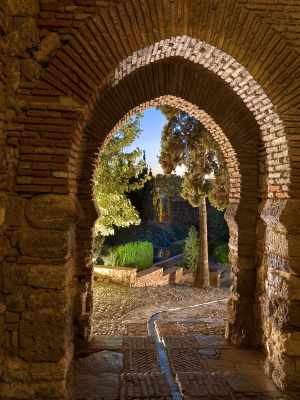 As for the fortress itself, its most renowned period is that of Badis, king of the Zirid Taifa of Granada, who took the city in 1056, expelling the Hammudids and annexing it to his taifa. In the text Memoirs of Abd Allah, Badis's grandson mentions that he endowed the Alcazaba with a double wall, employing all the technical and military advances of the time. He built a large part of the entry fortifications, highlights of which include the bent entrances called the Puerta de la Bóveda (Gate of the Vault) and the Puerta del Cristo (Gate of Christ), which was later renovated in the Nasrid era. He also renovated the 11th century palace of the Hammudids, constructing the pavilion of lobed arches that moves away from the Caliphate style, adapting to the new Taifa aesthetics.

The Torre del Homenaje was also fortified, and could have contained another gateway to the fortress in its lower area, away from the city, judging by the great monumental arch in the style of Madinat al-Zahra, which may have opened on to a representative room, but which is now completely filled in with rammed earth from the Nasrid period. The tower is located at the upper end of the upper precinct, protecting the palatine area and the service area. The Barrio de Viviendas (Neighbourhood of Dwellings) with baths and a cistern, which would have been for court figures or palace servants, and which could have housed around 50 people, is also from this period. There may also have been a rauda (cemetery) inside the fortress, judging by the maqabriya discovered in situ.

According to sources, during the period of the Taifa kingdoms, it was the Almohads who were responsible for the decoration of the Alcazaba, and the Torre Maldonado (Maldonado Tower) was monumentalised with marble columns and an inscription on their necking in Kufic letters. They were also responsible for the almagra (deep ochre) plinths that decorated the houses of the 11th century Barrio de Viviendas. In addition, the same sources also mention the use of the Alcazaba as a state prison. During the Almohad Dynasty, important relations were established between Malaga, Algeciras, Almería and the Maghreb ports. The Alcazaba continued to be a true palatine city, independent from the madina in all its functions.

The period when Malaga belonged to the Nasrid Kingdom of Granada, in the second half of the 14th century, with the governments of Yusuf I and Muhammad V (from 1333 to 1391), was a period of stability. The city of Malaqa underwent great development, and came to have about 150,000 inhabitants. At this time, the fortress of the Alcazaba was no longer only a fortification and had become a palace-fortress, and the seat of the city government. It was made up of two fortresses, one inside the other, protected by a series of fortifications that had to be passed through before entering the closed precincts. By 1340, artillery was becoming widespread, which made it clear that the interior of the fortress was vulnerable from the nearby Mount Gibralfaro. Yusuf I undertook the works on the Castle and the Coracha (fortified walkway), although it is possible that neither were finished when he died in 1354, instead being completed by his successor Muhammad V.

It had political and administrative powers, was the seat of the government and of the city hierarchies, and functioned as a small independent madina, with administrative and residential functions, as well as its defensive ones. Its total area was 14,200 m², of which 7,000 m² were built on, with 3,478 m² of civil constructions and 3,516 m² of military constructions.

From the time of the Catholic Monarchs to the present day, we can highlight the gradual occupation of its spaces, initially as an artillery space and the residence of the Governor, as well as the constant repairs it had undergone. From the 18th century, with its abandonment by the city’s political forces and its military administration, the upper part of the fortress was occupied by the civilian population, turning it into a marginalised neighbourhood of the city. It was not until 1933 that the restoration work began, resulting in the outstanding recovery of this monument.