The City’s Coat of Arms: Alcazaba and Gibralfaro Castle...Icon to collapse/uncollapse the block
Download Pdf 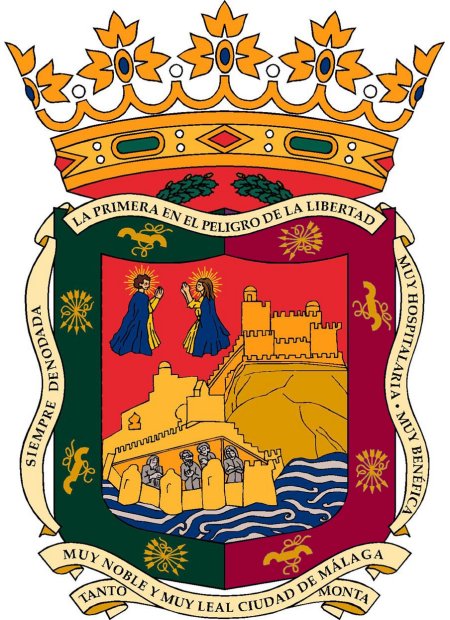 In the summer of 1487, Gibralfaro Castle was besieged by the Catholic Monarchs. Following their victory, King Ferdinand turned the Castle into their residence, and Queen Isabella opted to remain in the city. After the conquest by the Catholic Monarchs, the monumental complex became the symbol of the city, as on 30 August 1494, they presented its Coat of Arms, which depicts the Alcazaba with the Corral de los Cautivos (Pen of the Captives), the Coracha (fortified walkway) and Gibralfaro Castle, with images of its patron saints, Saint Ciriaco and Saint Paula, over the towers. 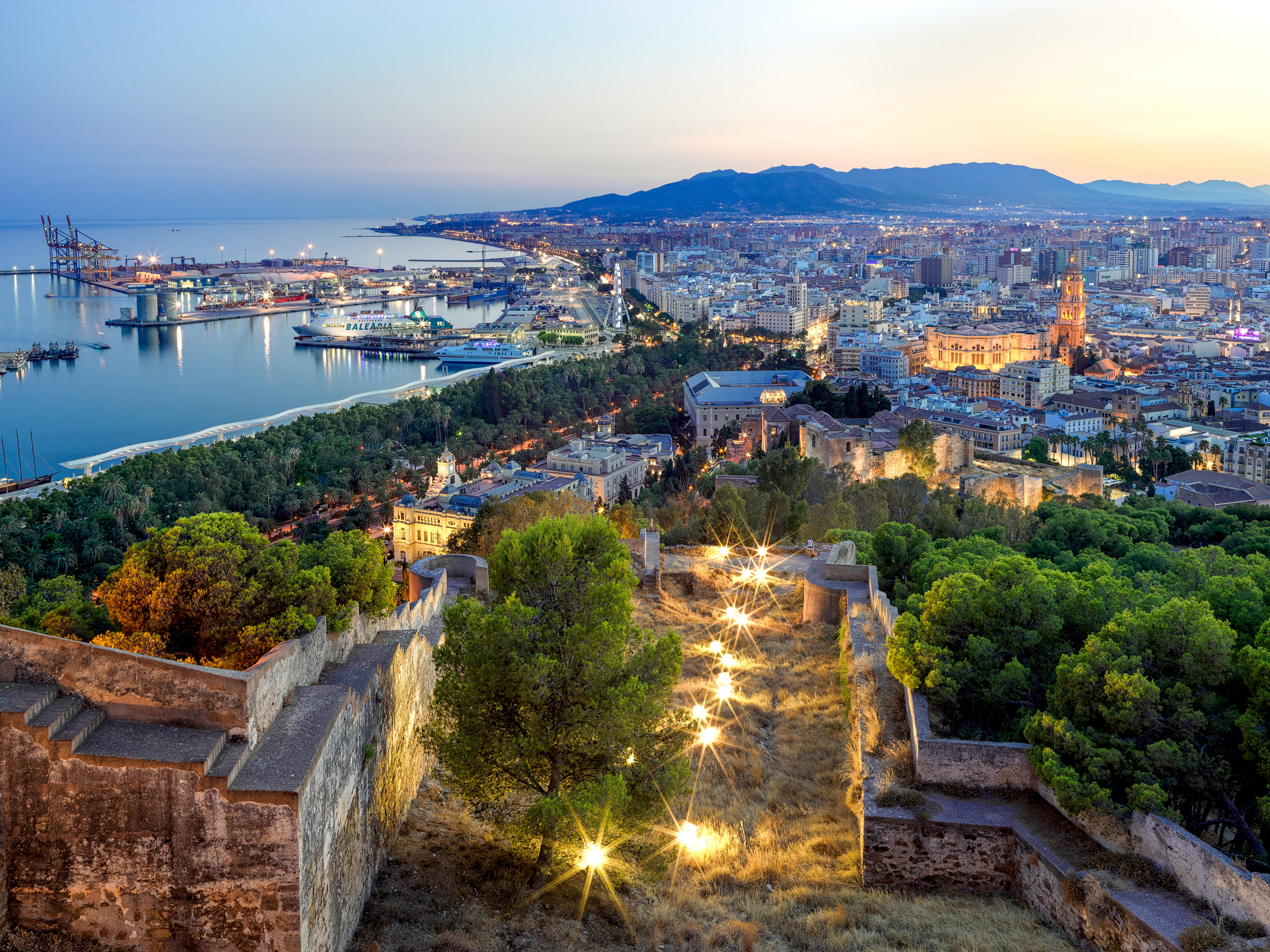 This is the protected path that communicated the palace-fortress of the Alcazaba with the Castle, via a single access. The Castle’s only door, which was monumental in nature, opened on to the Coracha, which on reaching the Castle opened to surround it with a barbican. This zigzag construction avoided the need to build Albarrana Towers, and it was made up of two parallel walls crowned by a wall-walk that climbed the mountain.

The Castle contained the troops’ barracks and was the city’s last defensive stronghold. It was built in the times of Yusuf I, in 1340, and due to its imposing appearance it was mentioned as a highlight by all travellers and by the Chronicles of the Conquest. Only one other Coracha is still preserved in Spain, located in Badajoz. In the 19th century, the humble houses that began occupying the lower part of the hill, which are now no longer in existences, became known as the Barrio de la Coracha (Coracha District). 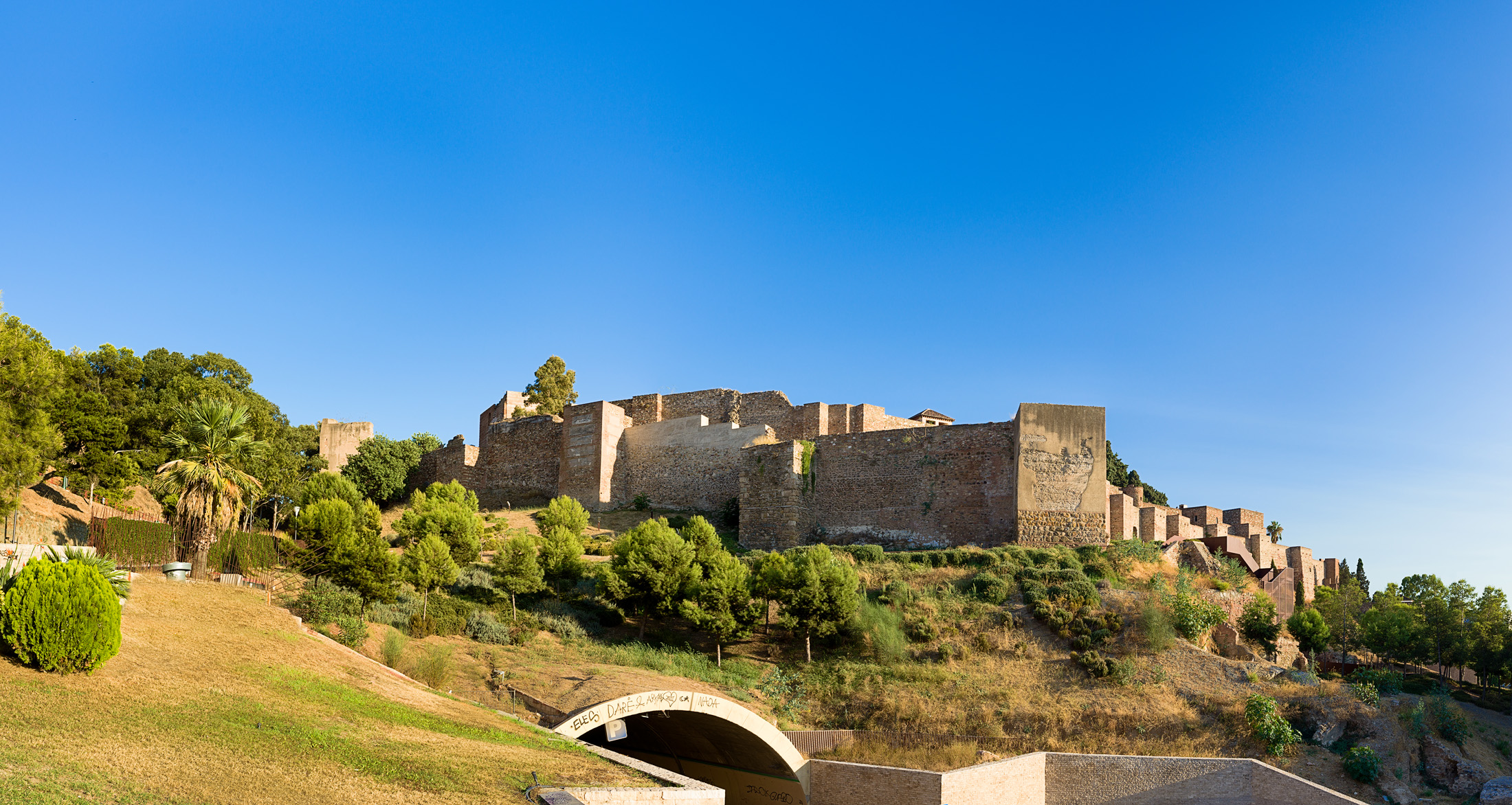 In 1938 the Chief Engineer of Roads and Works of the City Council, Wilfredo Delclos Ladrón, wrote and executed the “Project of the Mundo Nuevo Tunnel”, which would connect Calle Mundo Nuevo with Calle Haza de la Alcazaba, facilitating monitoring and access by opening the area to road traffic, and by connecting it with the upper district of Coracha, which is no longer in existence. The dream of linking the area of Plaza de la Merced with the southern slope of the Alcazaba over the park was thus fulfilled, overcoming the old obstacle posed by the presence of the fortress. This problem was definitively solved with the construction of the modern Alcazaba tunnel, which directly connects the park with the Plaza de la Merced, running under the hill.

Reforestation of Mount Gibralfaro...Icon to collapse/uncollapse the block
Download Pdf

The reforestation of Mount Gibralfaro was undertaken in 1939, and it forever changed the perception of the monumental complex, undoubtedly beautifying the surroundings and giving the city a green space, but causing it to lose its image as an impregnable space. Up until then, the hill had been a barren space, which facilitated its defence, preventing fires and ambushes and giving a view of the majestic fortification complex from all vantage points in the city and from the sea

Reused material from other civilizations...Icon to collapse/uncollapse the block
Download Pdf 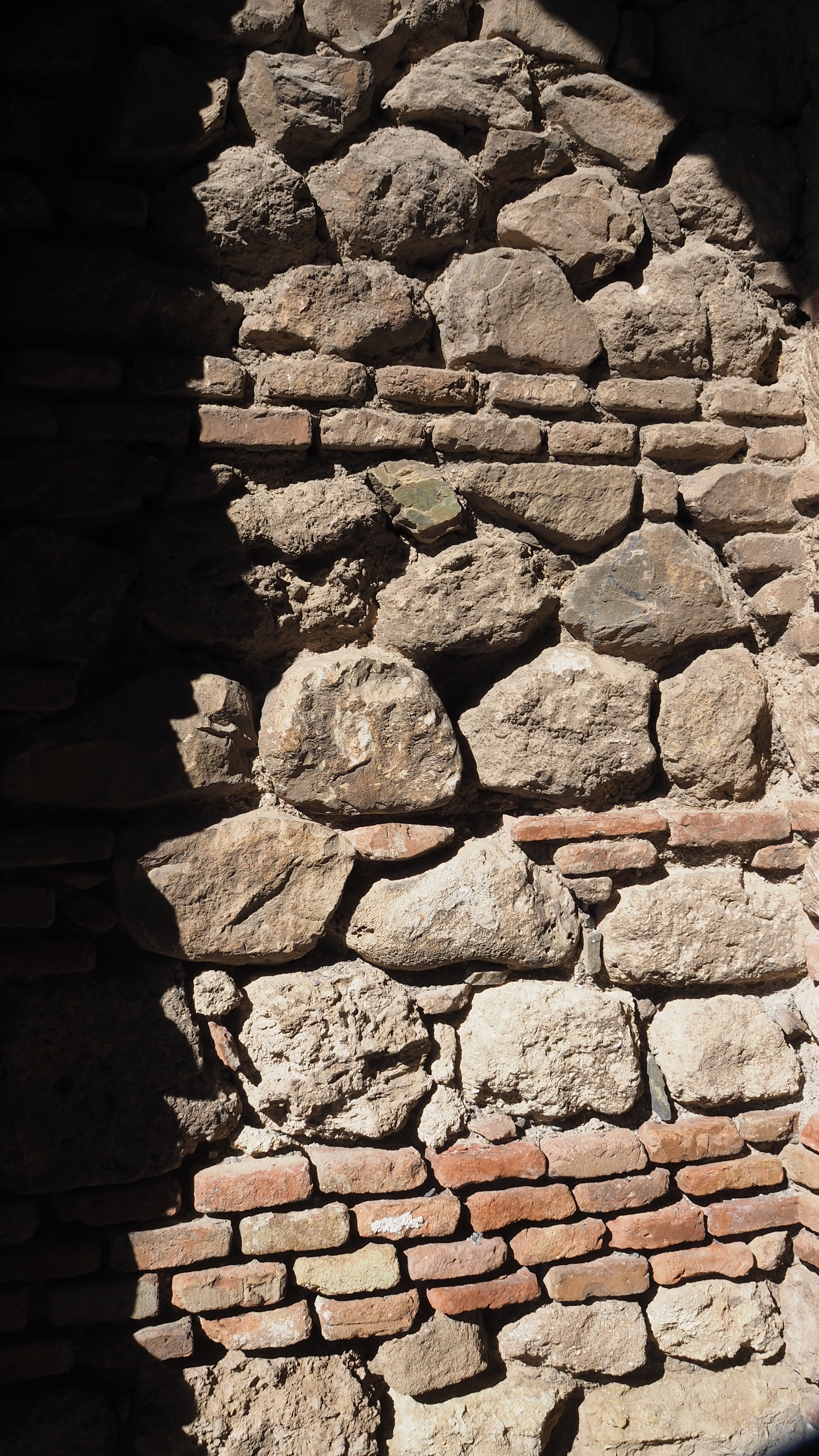 In the construction of the Alcazaba, elements from other civilizations were taken advantage of, such as Roman shafts, marble and capitals. (Photograph from Fanny’s book, page 105). Some of the most significant examples of this are the Roman white marble shafts and Corinthian capitals, dating back to the Roman period, that were reused in the Puerta de las Columnas (Gate of the Columns) and Puerta de la Bóveda Vaída (Gate of the Sail Vault).

Rammed earth is a construction system similar to modern concrete, built on a foundation or plinth that can be made of stone or brick, which provides insulation from damp. A kind of box is built, made out of wooden planks that are held in place by transversely placed beams and that are filled with a mixture of lime mortar, sand and ceramic fragments, which is then compressed. Once this mixture has set, the planks are removed (and can be reused again), and the protruding heads of the beams are cut off in order to begin a new course. The completion of several courses results in a monolithic work that is plastered in order to give its exterior a regular finish, and which was sometimes painted to imitate ashlars. It is a very durable, resistant and economical construction system. This system was used to build most of the Gibralfaro Castle, and it can be seen in some areas of the Alcazaba, such as in the Torre del Homenaje (Keep). On other occasions, the rammed earth was covered by a masonry veneer, although this use is restricted to the interior of the walls. On the south side of the Torre del Homenaje, you can clearly see the rammed earth and the holes left by the beams once they rotted away. Some conserved stretches of the city’s Islamic wall are also made of rammed earth. 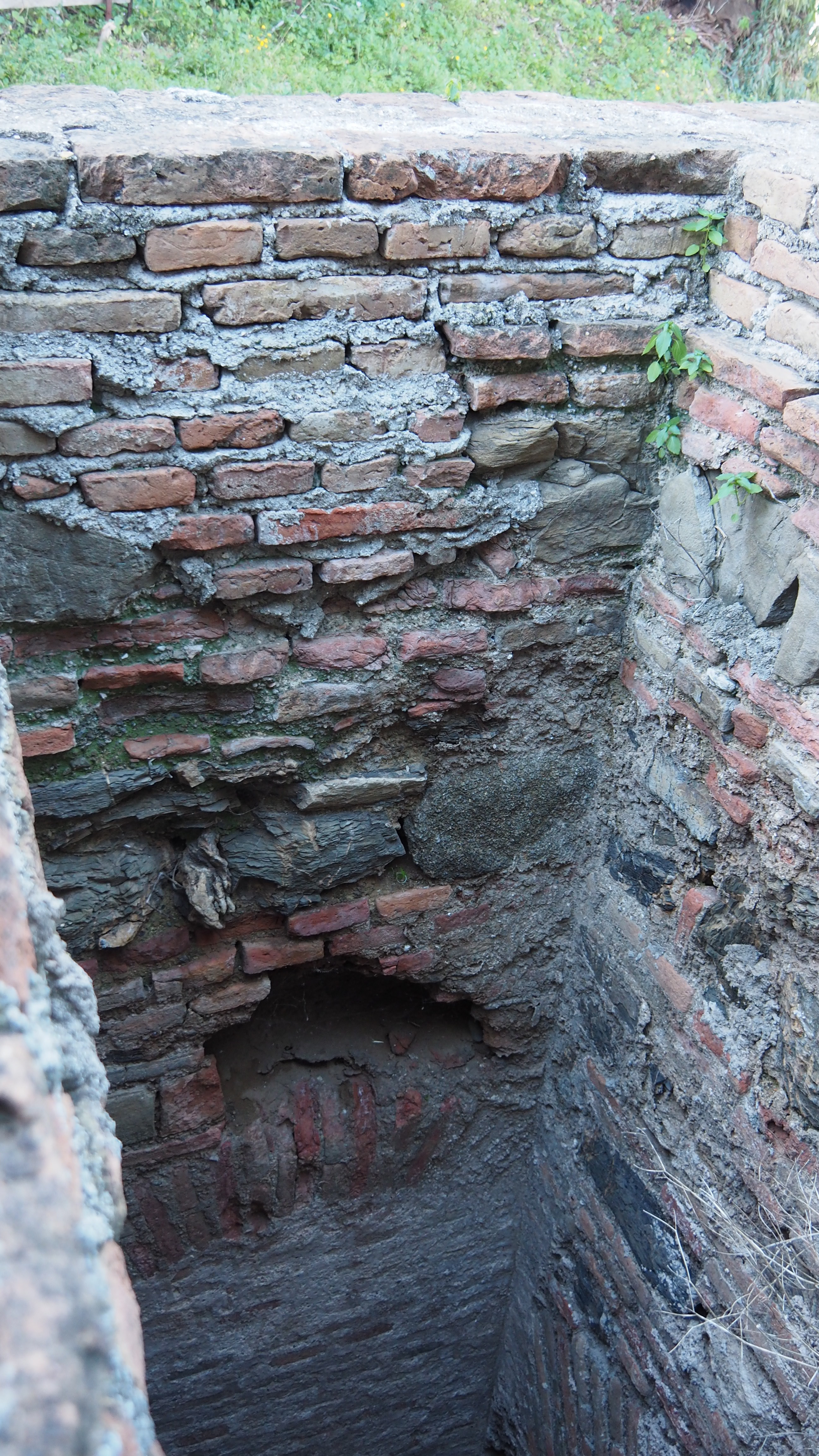 The two openings to the dungeons are on the north side of the lower precinct. They are built following the same system as the silos: they are like a large inverted funnel, which made them impossible to scale, and both openings are quite narrow. In this area of the hill, these hollows are very damp, which must have made a period of residence within them very hard. In principle, the captives were not meant to stay in the dungeons for a long time. The captives were an asset – they were made to work, they were exchanged with the other side for their captives, and they could be redeemed through the payment of a ransom, something that could be organised by the family, relatives, communities or religious orders created for this purpose, such as the Mercedarians, an order founded in 1218 for the redemption of Christian captives in Muslim territories. Of course, during certain periods of instability captives could be confined in the dungeons, as could political opponents whom they did not dare to eliminate directly, instead confining them within what the French called “oubliettes”, underground dungeons where people were sent to “be forgotten”. The dungeons of the Alcazaba are identical to those that exist in the Alcazaba of the Alhambra of Granada, although a little smaller. 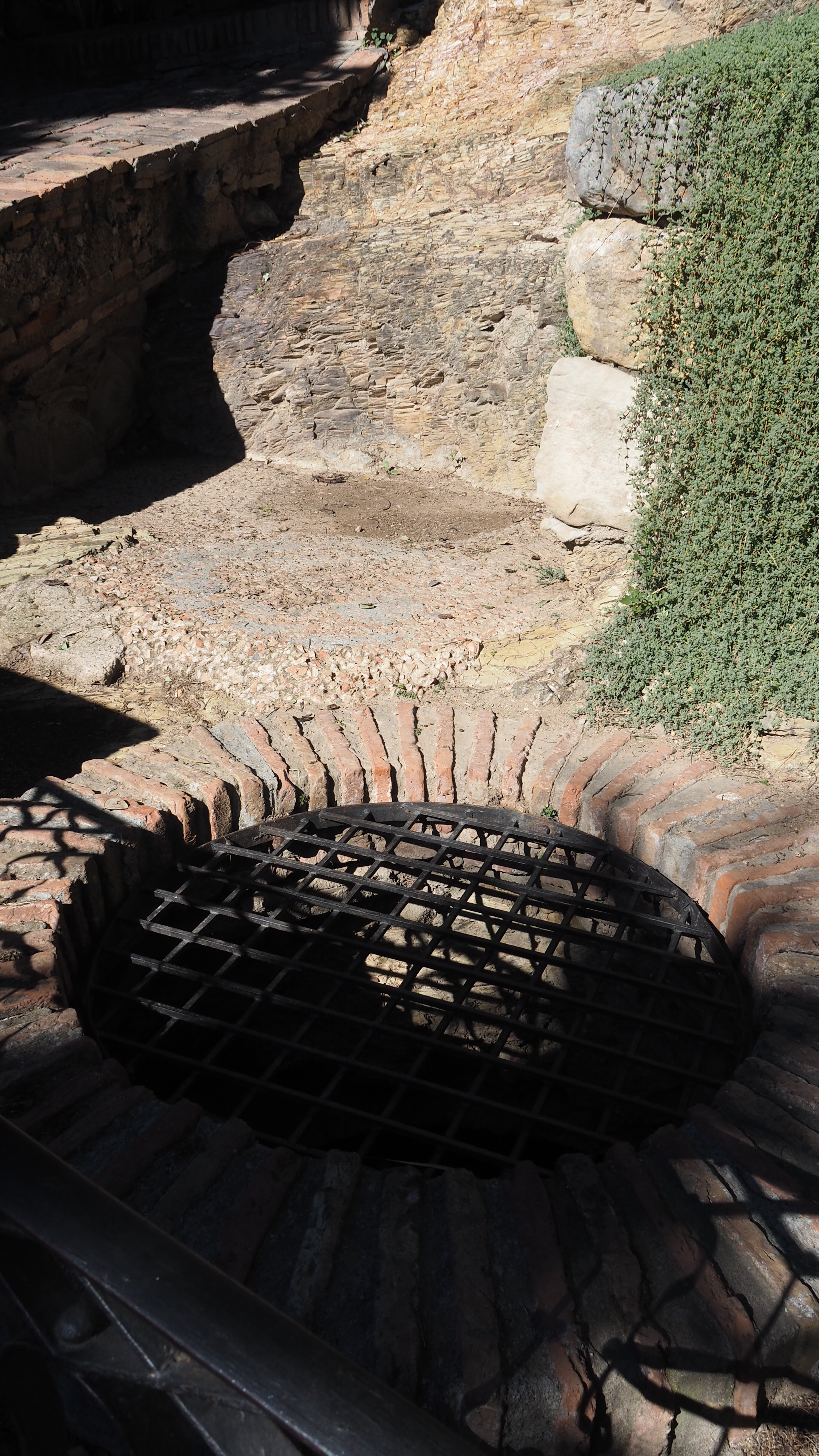 There are three silos in the Alcazaba similar in structure to the dungeons, but smaller, and in areas where there is no dampness. In many cases they have been confused with dungeons, and it is possible they could have been used for that purpose at some point in time. The first is by the exit of the Puerta del Cristo (Gate of Christ): in front of it there is an excavated space, now broken, which previously housed the image of the Virgin of Atocha, a white marble figure, which came from the works of art gathered after the Civil War, and which is now part of the collection of Museum of Malaga. Next to this space, protected by a small railing, there is a silo or grain store, the mouth of which opens into the floor of a Roman garum basin, built and covered with “opus signinum”, a kind of concrete containing many ceramic fragments, which is very long-lasting, and which can still be clearly seen. The silo was built on this site, like the other found in the upper precinct, because it is an area of living rock, with no fissures, which prevents moisture from seeping in. In Roman times, the southern slope was therefore full of garum and fish salting basins. In fact, it is very likely that this space was also used for the same purpose when Malaka was a Phoenician factory, given the morphological characteristics of the hill, as well as the level of sunshine in the area, which is completely south facing. 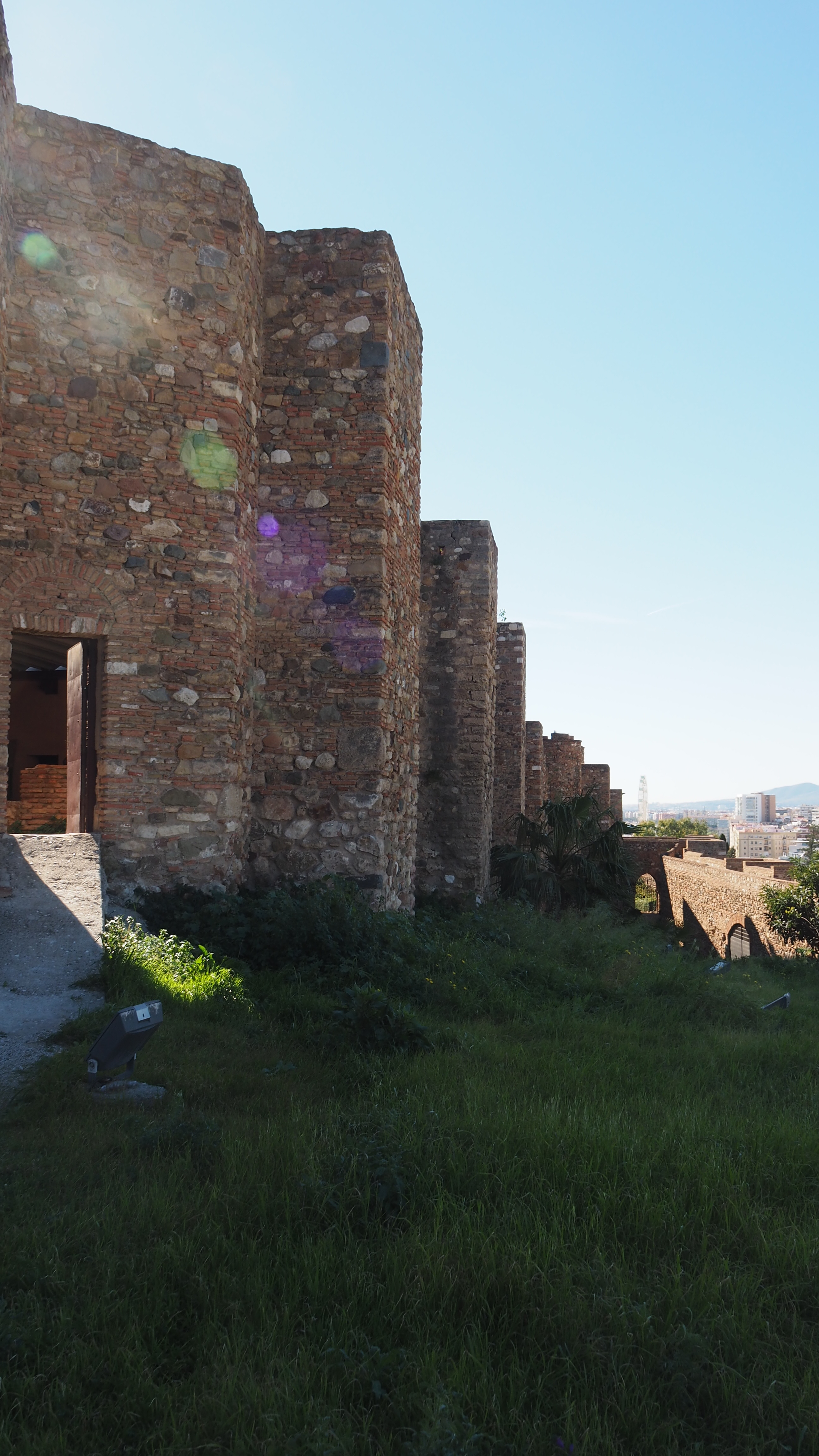 It is very interesting to observe from the Plaza de Armas how you can go completely around the whole Alcazaba using the wall-walk. It runs over the sections of wall, entering and exiting the different towers, and going up and down, allowing everything to be monitored from the highest areas. In the case of the Torre del Cristo (Tower of Christ), the wall-walk crosses through it, leaving the room to the right. The wall-walk, also known as the patrol path, narrows even further at the only point where it connects with the upper precinct, over the arch that covers the modern gate that gives way to the northern area of the lower precinct. From the wall-walk there is access to a small passage inside the end of the only tower through which you can enter the upper precinct.

Total area of the palace-fortress precinct...Icon to collapse/uncollapse the block
Download Pdf

In the studies carried out by Dr Rafael Puertas Tricas, director of the Museum of Malaga, the double function of the precinct as a palace-fortress become evident from the measurements of its space. The total area of the Alcazaba is 14,208 m², of which 6,994 m² are built on and 7,214 m² are currently not built on. Of the built area, 3,478 m² are occupied by civil buildings and 3,516 m² corresponds to purely military buildings. 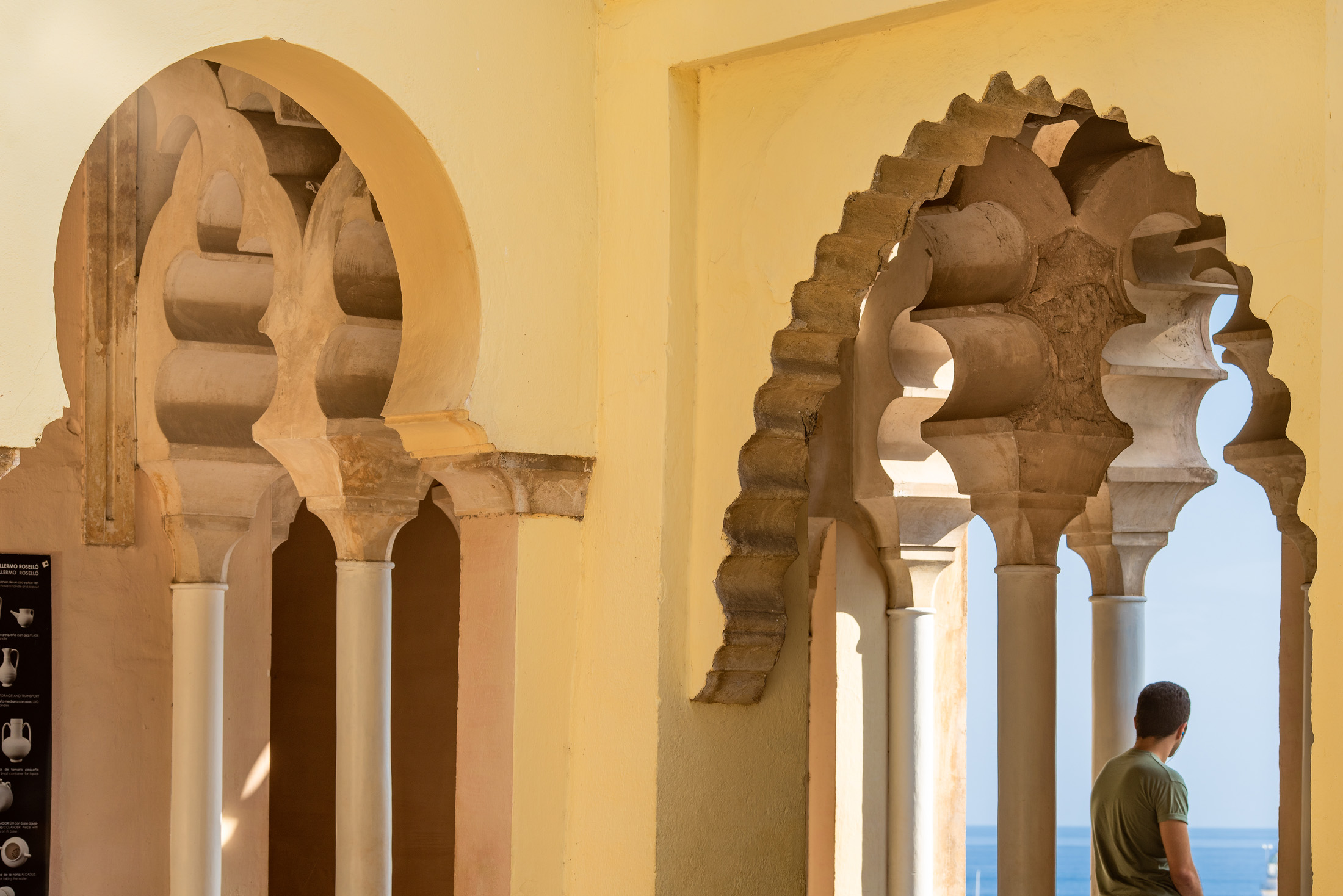 Included within the Taifa Palace, this Mudéjar ceiling remains in its place of origin. King Philip IV stayed in this room when he visited the city in 1625. It was part of what in Christian times was the residence of the Governor, until this was moved from the upper area and it became integrated with the popular housing that occupied the space.

The framing of the ceiling that covers this room has a trapezoidal section, with four panels finished off in the centre with an octagonal central piece (almizate) decorated with a muqarnas cone, framed by another four smaller ones, all this surrounded by eight eight-pointed stars. Pieces called limas are used to assemble the four panels, in this case formed by two parallel beams that form dowels. Thus, structurally it is a ceiling of limas, and its decoration is of knotwork that is apeinazado, meaning the interlaced eight-pointed star design is carried out on the basis of a peinazo that is assembled and not nailed. In the lower part of this typical Muslim ceiling, there are two decorative bands, the upper one decorated with triglyphs and the lower one with abstract plant forms, drops and half circles, with the corners finished with moulded corbels with crosspieces in the angles.