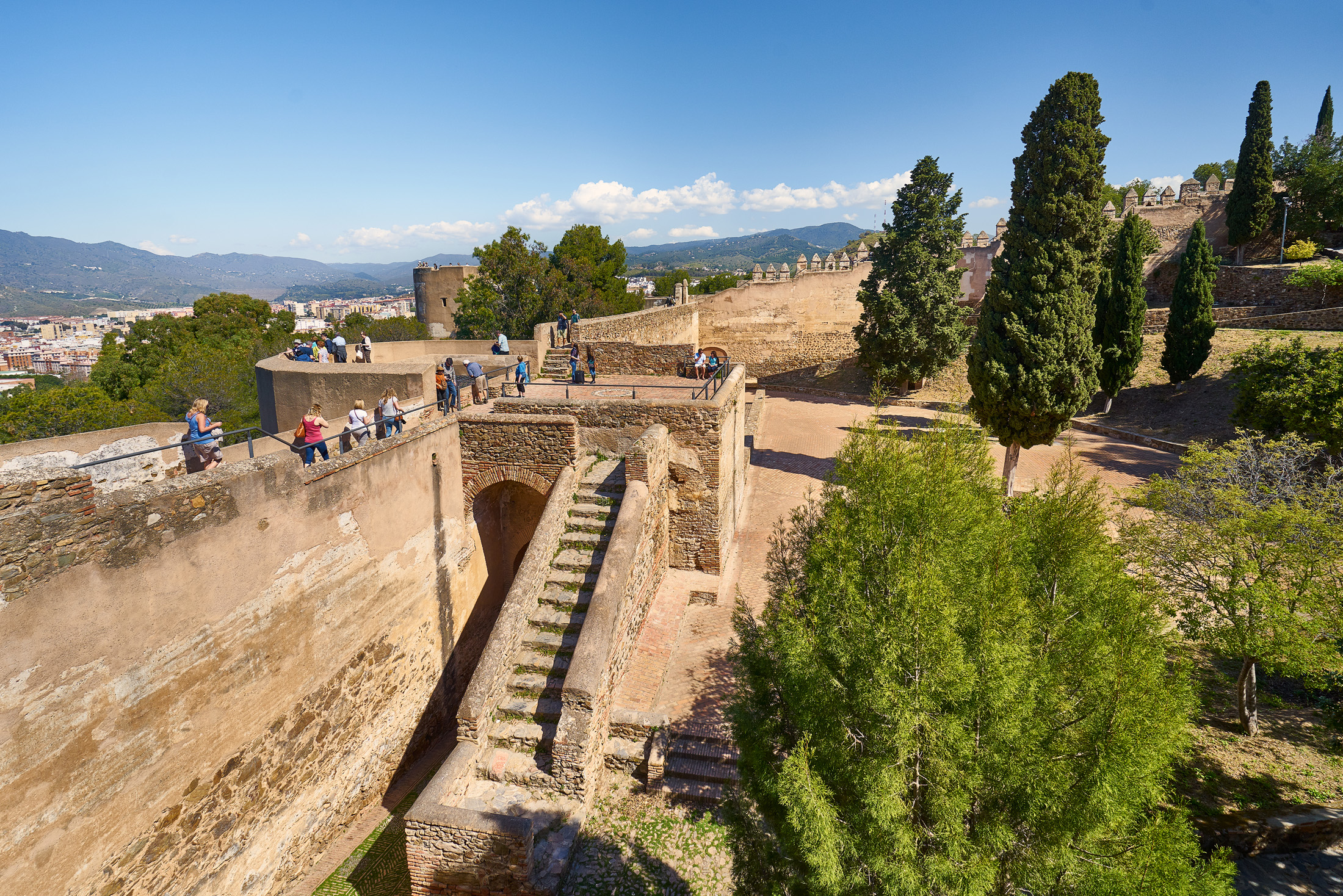 The Gibralfaro fortress dominates the whole city, and is situated on the crest of a long rise located 132 m above sea level, whose steep slopes descend toward the sea and toward the city. From time immemorial this fortress was the great watchtower used not only to observe the population settled at its feet to the west, but also the access to it by land and sea.

The layout of the walls of the Gibralfaro fortress is very irregular, as is the case with the Alcazaba. Despite the length of the perimeter, very few bastions are present, in spite of the breaks found in the layout of the walls. The large Albarrana tower known as Torre Blanca (White Tower) rises above the northwestern area of the walled enclosure; that is to say located outside the walled enclosure but attached to it by an added fortification.

The building responds to the irregular and broken topography by adapting to the ground and with two walled enclosures[1], one of lower height (the barbican), crowned by a wall-walk, which is protected by a parapet topped by battlements that acted as elements that protected the troops. The construction material used was rammed earth laid on a foundation plinth made from the local stone – shale – plastered with lime mortar to protect it and to provide a more regular finish. The sections of wall were built following the topography of the land.

After the interventions made during the Modern Age, the wall is currently made up of thirty sections, reinforced by eight towers, among them a large Albarrana tower, called the Torre Blanca (White Tower), the largest preserved in al-Andalus, located in the northwest with a U-shaped floor plan, which was used as a prison at various times. This is built into the hill, dominating the only gateway that exists, closing the barbican that opens to the Coracha (fortified walkway) on its northern slope. This provides an impressive bent entrance, preceded by a space for the guardroom, loaded with symbolism and covered with a sail vault decorated with lacería (regular interlacing patterns) made with cut bricks and two-coloured ceramics[2]. Inside was a cistern for collecting water, rooms and storerooms, making a prolonged stay of the members of the garrison possible.

The Torre Mayor (Main Tower) is located in the southeast, and is also an autonomous fortified element with its own water supply, stores and homes. It is 17 metres high and was the best place from which to monitor the castle. There is also another small tower, in its eastern corner, with a narrow staircase that ascends several levels, and with a room for the guard.

The fortification is enclosed within a barbican that opens to form the Coracha, the fortified walkway that descends steeply to join the Alcazaba, its single point of communication with the outside world, and whose original zigzag design avoided the construction of costly Albarrana towers.

The walls of the castle were topped with pyramidal merlons[3] and it has a narrow wall-walk that encircles the castle, a large well excavated in the living rock called Airón Well, which is more than 40 metres deep, several cisterns and bread ovens. A mosque was found in this area, surrounded by a cobbled street, under part of what is today the Interpretation Centre, in the building that was used as the gunpowder magazine in the 18th century. After the conquest, this mosque was consecrated as a chapel dedicated to Saint Louis.

Very few Arab remains were found in the interior of the Castle, due to its military use and the many interventions that occurred during the Christian era, such as the removal of the mosque and its outbuildings. Later it was partly blown up by the French, along with the ammunition they could not transport, when they retreated from the city during the Spanish War of Independence. The Castle’s gunpowder magazine is currently occupied by an Interpretation Centre